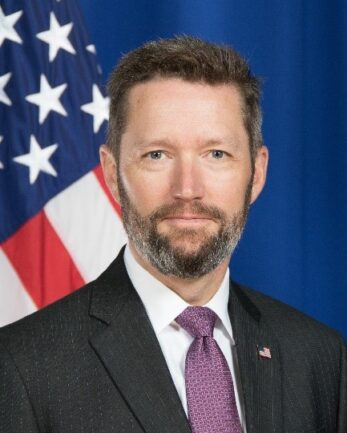 Keith Gilges, a career Foreign Service Officer, will begin his service as Deputy Chief of Mission to Embassy Bujumbura in June 2022.

He was detailed for one year to the National Security Council at the White House where he served as the Director for North America overseeing interagency policy development for Canada and Mexico from 2017 to 2018.

He previously served in the Office of Canadian Affairs at the State Department from 2015-2017.  He acted as Deputy Chief of Mission for the U.S. Embassy in Trinidad and Tobago from June 2014 to June 2015 where he also served as Chief of the Political/Economic Section beginning in August 2012.  Mr. Gilges previously served in various positions at U.S. Missions in Kenya, Brazil, and Mozambique.  In Washington, he served in the Bureau of Intelligence and Research as Chief of Staff to Assistant Secretary Randall Fort, and as the Bureau’s liaison to Capitol Hill.

Prior to joining the Department of State in 2001, he was Deputy Director of the U.S.-Asia Environmental Partnership at the U.S. Consulate General in Hong Kong – a joint Commerce Department-USAID program – from 1998 to 2001.  From 1990 to 1996, he worked in Washington as an environmental policy advocate for a small non-profit professional association.

Mr. Gilges speaks French, Portuguese, and Swahili.  He holds a Master of Science in Environmental Management (with distinction) from the University of Hong Kong, and a Bachelor of Arts from the College of William and Mary in Virginia.