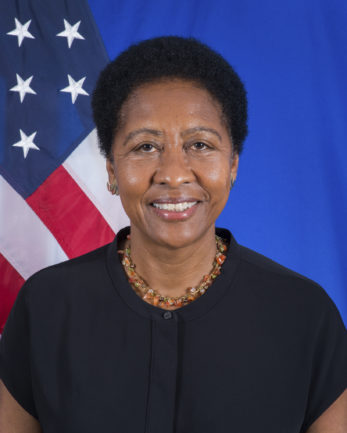 Ambassador Reddick serves as the Charge d’affaires, a.i. at U.S. Embassy Bujumbura, Burundi.  She held two ambassadorial appointments in Africa – representing the U.S. in Niamey, Niger from 2014 to 2017, and in Libreville, Gabon from 2007 to 2010.  She also served as Charge d’affaires as U.S. Embassy Nouakchott, Mauritania before her Niger appointment.

Reddick was Diplomat-in-Residence at Howard University from 2010 to 2011, advising students and career-seekers in the Washington, DC region on State Department careers and foreign policy issues.  She held two Africa regional directorships at the State Department, managing U.S. relations with East Africa and West Africa.  In addition to her Africa experience, Reddick covered political issues at the American Institute in Taipei, Taiwan, and the U.S. Embassy in Beijing.  She also held director positions managing U.S. relations with Southeast Asia in the State Department.

Following graduate studies in international affairs at Columbia University, Reddick worked on a USG-financed scholarship program for Southern African refugees at the Africa-America Institute.  She continued to support African refugee assistance in one of her first assignments at the State Department.

Reddick was the 2018-19 DACOR Lecturer at the U.S. Army Command and General Staff College in Leavenworth, Kansas.  In 2018, she was an instructor on political tradecraft at the Washington International Diplomacy Academy (WIDA).  Reddick served on the selection committees for the 2018 Rangel Fellowship program and the 2019 American Foreign Service Association (AFSA) Scholarship program.